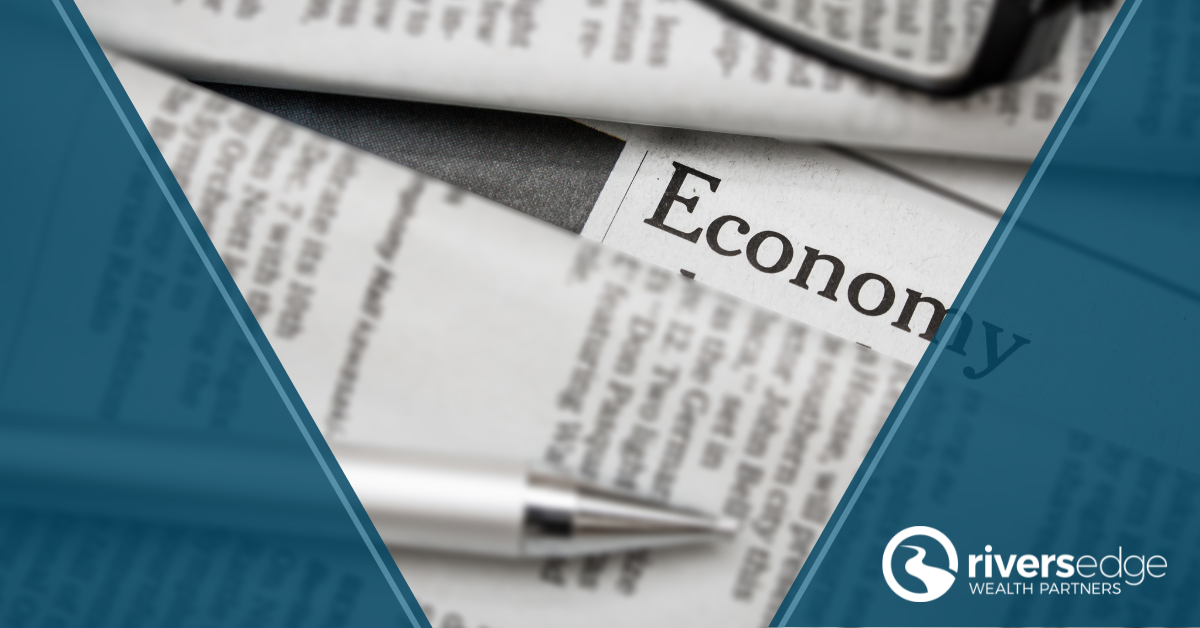 What Does a Strong Dollar Mean for the U.S. Economy

In late September 2022, the U.S. dollar hit a 20-year high in an index that measures its value against six major currencies: the euro, the Japanese yen, the British pound, the Canadian dollar, the Swedish krona, and the Swiss franc. At the same time, a broader inflation-adjusted index that captures a basket of 26 foreign currencies reached its highest level since 1985. Both indexes eased slightly but remained near their highs in October.1–2

Intuitively, it might seem that a strong dollar is good for the U.S. economy, but the effects are mixed in the context of other domestic and global pressures.

The U.S. dollar is the world's reserve currency. About 40% of global financial transactions are executed in dollars, with or without U.S. involvement.3 As such, foreign governments, global financial institutions, and multinational companies all hold dollars, providing a level of demand regardless of other forces.

Demand for the dollar tends to increase during difficult times as investors seek stability and security. Despite high inflation and recession predictions, the U.S. economy remains the strongest in the world.4 Other countries are battling inflation, too, and the strong dollar is making their battles more difficult. The United States recovered more quickly from the pandemic recession, putting it in a better position to weather inflationary pressures.

The Federal Reserve's aggressive policy to combat inflation by raising interest rates has driven demand for the dollar even higher because of the appealing rates on dollar-denominated assets such as U.S. Treasury securities. Some other central banks have begun to raise rates as well — to fight inflation and offer better yields on their own securities. But the strength of the U.S. economy allows the Fed to push rates higher and faster, which is likely to maintain the dollar's advantage for some time. 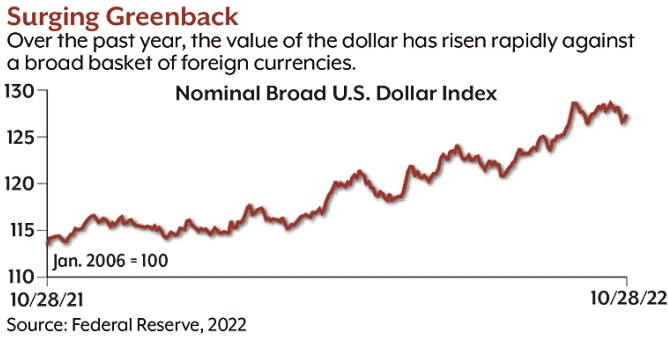 The strong dollar makes imported goods cheaper and exported goods more expensive. Cheaper imports are generally good for consumers and for companies that use foreign-manufactured supplies, but they can undercut domestic sales by U.S. producers.

At the same time, the strong dollar effectively raises prices for goods that U.S. companies sell in foreign markets, making it more difficult to compete and reducing the value of foreign purchases. For example, a U.S. company that sells 10,000 euros worth of goods to a foreign buyer would receive less revenue when a euro buys fewer dollars. Some experts are concerned that the strong dollar will dampen the post-pandemic rebound in U.S. manufacturing.5 More broadly, the ballooning trade deficit cuts into U.S. gross domestic product (GDP), which includes imports as a negative input and exports as a positive input.

Generally, large multinational companies have the most exposure to risk from currency imbalances, and the stock market has shown signs of a shift from large companies — which have dominated the market since before the pandemic — to smaller companies that may be more nimble and less dependent on overseas sales. The S&P SmallCap 600 index has outperformed the S&P 500 index through late October; if the trend continues through the end of the year, it would be the first time since 2016 that small caps have eclipsed large caps.6 The S&P MidCap 400 index has done even better. In the current bear market, however, better performance means lower losses; all three indexes have had double-digit losses through October 2022.7

A weak currency can be a boon for a country by making its exports more competitive. But with the world economy weakening, other countries are not reaping those benefits, while paying more on debt and imported essentials such as food and fuel that are traded in dollars. The Fed is focused on domestic concerns, but it is effectively exporting inflation while trying to control it at home, and global economic pain could ultimately spread to the U.S. economy.8

In the near term, the Fed's aggressive rate hikes may reduce domestic demand for foreign goods, reducing the trade deficit and weakening the dollar. The advance Q3 2022 GDP estimate showed the trade gap closing, but it's unclear if the trend will last.9

In the longer term, as inflation eases in the United States, the Fed will likely take its foot off the gas pedal and ultimately bring rates down. This would allow other central banks to catch up if they choose to do so and would make foreign currencies and securities more appealing. Lower oil prices (denominated in dollars) and/or any reduction in world tensions — such as a slowdown in the Russia-Ukraine war — might also help reduce demand for dollars.

The dynamics of these factors are complex, and it may take time for any of them to unfold. In the meantime, the strong dollar is a sign of U.S. economic strength, and it would not be wise to place too much emphasis on it for long-term investment decisions. However, this could be a great time for an overseas vacation.

All investments are subject to market volatility and loss of principal. Investing internationally carries additional risks such as differences in financial reporting, currency exchange risk, and economic and political risk unique to the specific country. This may result in greater share price volatility. Shares, when sold, may be worth more or less than their original cost. The value of a foreign investment, measured in U.S. dollars, could decrease because of unfavorable changes in currency exchange rates.

Content in this material is for general information only and not intended to provide specific advice or recommendations for any individual. All performance referenced is historical and is no guarantee of future results. All indices are unmanaged and may not be invested into directly.

The information provided is not intended to be a substitute for specific individualized tax planning or legal advice. We suggest that you consult with a qualified tax or legal professional.

This article was prepared by Broadridge.